﻿﻿
﻿﻿Unravelling the intercultural phenomena known as the 'Weeaboo.'


A weeaboo is a non-Japanese obsessed with Japan and all things Japanese, AKA Japanophile, wapanese, otaku, anime/manga nerd, fangirl. A Chinese Japanophile is called harizu (search Youtube or BBC Facebook group). These girls sometimes interchangeably fetishize about Korean culture too but usually it is through discovering Japanese culture first.

Due to cultural bias in discovering Japanese culture before any other Asian culture, young Asiaphile westerners perceive Japan to be a gateway to the rest of Asia, for example, a White Wapanese female once said that I should be indebted to Japanese culture for making Asian guys desirable to White girls, this is in reference to the fact that the White English females who have 'made a move' on me have been Japanophiles, not 'normal' White girls - if only her statement was true. Dating site's are valuable for research sampling, they reveal ethnic dating preferences, such prejudicial information is rarely disclosed in real life. On one unnamed site, 18 White female profiles contained typical Japanophile references (Hayao Miyazaki etc), of which 6 (33%) excluded Asian guys from their ethnic dating preference. The majority were no-racial-preference girls, merely multi-cultural consumers who enjoy different cultures. 2 out of the 18 stated a narrow preference for Asian guys (it is rarely an exclusive preference for Asian, rather Asian and another race i.e White), it is reasonable to surmise its a preference for Japanese men (because of the culture, wish to learn the language and a requirement to find a host for a visit to Japan), given a choice that is, but there are few Japanese in the UK, these types of girls are more likely to date a Chinese, many can't tell the physical difference between East Asian's either, any 'oriental' guy will do.


How to spot the self-haters...

1. Voluntary emigration
2. Marrying and/or breeding with another race
3. Refusing to speak their own ethnic language
4. Refusing to follow the culture/values/religion pertaining to their own race
5. Allegiance in the event of war, conflict or sporting competition etc

Weeaboo's exhibit most of the above and typically spout...


"My country sucks. I wanna emigrate, live, study or work in Japan. I wanna get a job as an artist working for Studio Ghibli. Mixed race half white half Asian are so kawaii, I wish I was half Japanese myself. I am learning Japanese language and wear cosplay Gothic Lolita clothes, watch anime, manga, listen to visual kei and eat Ramen Noodles and support Japan during the World Cup."

Common characteristics are 'weeaboo denial and weeaboo delusion.' When accused of being a weeaboo, they will deny it and point their finger at 'her over there' in an attempt to distinguish themselves as a 'proper' Japanese even though they're Caucasian, some paradoxically call other foreigners  "baka gaijin" (these 2 words along with kawaii are usually the only Japanese words an average weeaboo knows). A reality check in the mirror will see what race they are, wearing a kimono, watching anime and having a Japanese haircut will never make them Japanese, but in their mindset lies a desperate fantasy to be Japanese, thus a hatred of any race that isn't Japanese including their own race as well as an defence of Japan's war crime's record and an insistence the atomic bombs on Hiroshima and  Nagasaki were unjustified, rather like Nazi sympathizers disdain over the bombing of Dresden. Weeaboo's support Japan in sporting and cultural competitions rather than their own country, not that they're interested in sports, weeaboo's are too nerdy for sports, rather they participate in an individualist activity such as swimming, its rarely a team sport as weeaboo's tend to be low energy, anti-social, introverted and would rather be alone drawing on Deviantart.

Like many westerners living in the Far East, a large section were unpopular oddballs in their own western country so they seek out a new home. The internet allows them to fill this cultural void, indulging  in delusional nerdy otaku sub-culture. Ironically for these White fangirls is that many native Japanese dislike these types of foreigners, wapanese girls have a tendency to be juvenile in nature, their adolescence is the start of their wapanese fantasy, whereas some grow out of it by 21, others keep going, i.e they're 30 going on 12. They still watch anime at the age of 30. Their behaviour is predictable, starting off non-assuming and innocent, gradually evolving through a metamorphosis...eventually replacing their own western name with Japanese or Korean text or adding chan, sakura, neko, hime etc.

Westerners often associate anime/manga with Asian culture, arguably its nerd culture, hence a minority of nerds from the West find themselves compatible with a minority of nerds from the East, whereas a non-nerdy Asian male won't be that compatible with a nerdy White female, it follows that fangirls have a tendency to attract other western fangirl/boys like themselves rather than Asian's because of an admiration of a  sub-culture that is not mainstream in Asia. E.g, Visual kei, Gothic Lolita or some cross dressing effeminate Hizaki, its arguably more popular in the West than in Japan.

Why? Perhaps, these sub-cultural genres are western influenced. Anime characters are western looking with pointed noses, big round eyes, brown and blonde hair, Gothic Lolita costumes derive from Rococo and Victorian history, the band Versailles is a homage to the House of Bourbon hence the palace name and its period costumes, J-Rock, J-Pop etc is western music adapted, modified and re-packaged for  Japanese markets. White girls can relate to this, its their own western culture culturally appropriated by the Japanese.

Most White girls are outsiders looking through the Asian window, that's the nature of fandom, admiration  from a distance within their own fantasy world, even when they visit the Far East to fulfil their dream, they don't last long there, they're foreigners, foreigners usually mix with other foreigners like themselves within their expatriate communities. Their big plans wither away, they can't hack it long term, White people are notoriously poor at adapting to foreign environments, they can't turn native, many cannot speak the local language fluently, in the end, they trail back to the west. Some have travelled or lived overseas for so long, they are unable to acclimatize, they become western versions of shengnu, some having experienced real Asian men and real Asian culture...no longer want to date Asian guys, whilst others upon their return to the west...end up marrying a westernised Asian guy.

It is assumed that a White female that dates an 'oriental' guy is attuned to his culture, this is often not the case. White girls just can't resist doing a Chinese accent, there are many Chinese guys who have no issues with that nor with her slanting her eyes with her fingers, they laugh it off, in the process legitimizing her conduct and giving her licence to continue doing it as she does not consider it to be inappropriate.

It is self-deprecation in the face of White people, even in comedy, Peter Chao (surprise surprise Davin Tong has a white girlfriend) is the worst culprit of recent times, such horrid accents are normally reserved for the likes of Peter Ustinov as Charlie Chan. Most mainlanders and Taiwanese won't know who Peter Chao is, 80-90% of his fans on Facebook are non-Chinese, most yellow fever girls like him, yellow fever girls also seem to love Russell Peters, an Canadian Indian stand up comedian who incessantly ridicules Chinese using stereotypes through the eyes of non-Chinese folks like himself. Yellow fever girls also appear to love Wong Fu Productions...From what I've seen all they do is pre-occupy themselves with testing Asian stereotypes to see if they're true or not, these are things that White people can relate to...i.e White interpretation of Asians through non-Asian spectacles,  that is precisely how White girls look at Asian culture and the exact reason why they find Russell Peter's amusing and why they slant their eyes for their Chinese boyfriend. There's an attuning mismatch in Asian male expectations of yellow fever girls behaviour to his culture and what yellow fever girls think Asian men or Asian culture is about. (BBCZeitgeist)
Posted by Anonymous 107 comments: 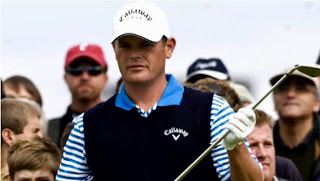 One of Scotland’s top pro golfers called a security guard a "stupid chinky" during a drunken row in McDonald's.

David Drysdale pleaded guilty to assault and racially aggravated breach of the peace at Edinburgh Sheriff Court on Tuesday.
The 37-year-old was with his wife Victoria when they went into McDonald's in Princes Street in the early hours of March 7 last year after a night out in Edinburgh.
The court was told the restaurant was very busy at the time of the incident and customers were having to queue for the one disabled toilet.
Security guard Hin Ho Li refused to let Drysdale upstairs to use closed toilets and an argument broke out. Fiscal depute Malcolm Stewart said when the golfer walked away from Mr Li, he called him "a stupid chinky".

Is smoking a problem for BBCs?

In the above Nicorette advert, Alex, a 31yr old trainee accountant tells us how, at the age of 16,he started smoking because of associations of it being daring, risky, adventurous and a form of rebellion against his parents.

Having tried to give up smoking 3 times, at the time, Alex saw smoking as a release, sometimes smoking 10-15 a day.  Alongside Nicorette products, taking up sport has distracted him from smoking and given more focus, and having successfully quit completely, now feels more upbeat in general.

According to the 2011 NHS Statistics on smoking,

"In 2004 the HSE included a boost sample to increase the sample size" of people in ethnic minority groups. The relationship between smoking status and ethnicity was explored in Chapter 4: Use of tobacco products of the associated report Health Survey for England 2004: The Health of Minority Ethnic Groups (HSE 2004)20.

Example findings include: self-reported cigarette smoking prevalence was 40% among Bangladeshi, 30% Irish, 29% Pakistani, 25% of Black Caribbean, 21% Chinese, and 20% in Indian men, compared with 24% among men in the general population.

Self-reported smoking prevalence was higher among women in the general population (23%) than most minority ethnic groups, except Irish (26%) and Black Caribbean women (24%). The figures for the other groups were 10% Black African,
8% Chinese, 5% Indian and Pakistani, and 2% in Bangladeshi women."

The GLF 2009 report presented variations in smoking prevalence in England in 2009 by Government Office Region (GOR). The sample sizes were relatively small, making them subject to relatively high levels of sampling error, thus interpretation of regional data has been treated cautiously. Among men, the prevalence of current smokers was highest in the North West (24%) and London (26%) and lowest in the East Midlands and South West (19% each). For women, the highest prevalence was found in the Yorkshire and the Humber (22%), the North East (23%) and the North West (22%) and the lowest prevalence in the South West (17%).

According to this June 2012 BBC news report regarding the British public smoking ban in 2004 entitled: Smoking Ban's impact five years on whilst the ban has had a huge effect on stopping smokers in public...

" there is no evidence as yet that smokers have given up smoking in huge numbers because of the legislation.

"It's children who start smoking, not adults. We need to prevent people starting in the first place, full stop."

For BBCs who are more integrated into British society, whether clubbing, dating, or work,  is smoking  more to do with 'fitting in' or like Alex, do we take up the habit to be 'rebellious' ? And how easy is it for us to give up, if ever?

get this widget here